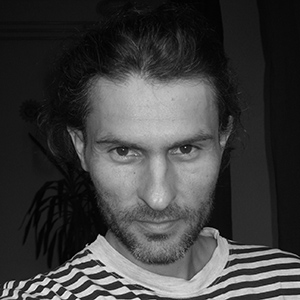 A painter driven by instinct rather than reason. Contact with art for him still has, as it was the case in history, foremost a spiritual and ceremonial dimension. His works are usually of a large scale for the maximum impact they make in a gallery setting. They are painted on the floor of his atelier, so that gestures on them are made by his whole body. He prefers tranquillity and meditation that can later erupt in a visual abundance of images. The subject matter on his paintings is instantly recognisable and strange at the same time. A figuratively rendered torrent permeated by awe and magical elements that address our emotions.

Born in 1973, in Murska Sobota, Slovenia. Earned a bachelor and master’s degree from the Academy of Fine Arts in Ljubljana. Lives and works in Mohorje and Ljubljana, SIovenia, and Leipzig, Germany.