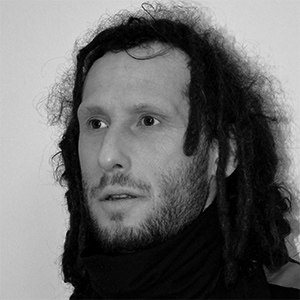 Weinberger’s mechanism for building artworks is a palimpsest like montage of visual quotes. Many of them are widely recognised as they saturate the media orbit to which we are all exposed. He is an engaged post-media painter in a society of simulacrums and spectacle: »My paintings relate to that aspect of social perception of visual information which we receive via the media. […] Chronic conditions of tragedies, famine, disasters and wars in recurrent areas create a sense of repetition of information that lose function of the news (and novelty) and remain a pale shadows of events. […] These paintings do something else. Due to unusual encounters of images, they compel a viewer to become an active observer and with their own interpretations to complement and transform their content. And what is the most important is that they generate discourse,« Weinberger says The visual result is a discontinuous aggregate that can harbour a number of discordant or contradictory meanings, scooped from the rich, suggestive stew of popular culture.

Born in 1975 in Trbovlje. Earned a bachelor and master’s degree from the Academy of Fine Arts in Ljubljana. Also, an excellent guitarist in the band Moveknowledgement. He lives and works in Ljubljana and Novo mesto.