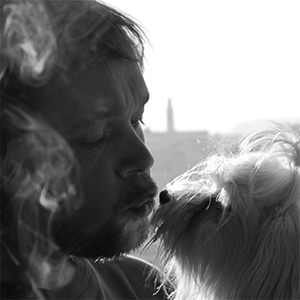 Leben is drawing moral lessons from animals as examples. He is not inspired by their outer appearance of furs and feathers – of their exact anatomy in a way a naturalist would be. Instead, he portrays them as protagonists in stylized situations that have coded meaning. For this a viewer has to know background of a particular story, often a tragic one. His favourite subjects are underdogs – usually in the appearance of bears and dogs. They are presented as sentient beings, man’s interlocutors and points of identification. Being soft animals with innocent eyes, helps them to get their message across, and builds viewers emotions and empathy.

Born in 1971 in Celje. Studied painting at the Academy of Fine Arts and Design in Ljubljana. He is co-founder of the Museum of Too Modern Art – a unique movement in Slovenian art history. He has participated in numerous solo and group exhibitions with Galapagos project as one of the most successful. He is also an awarded Illustrator and maker of animated films.